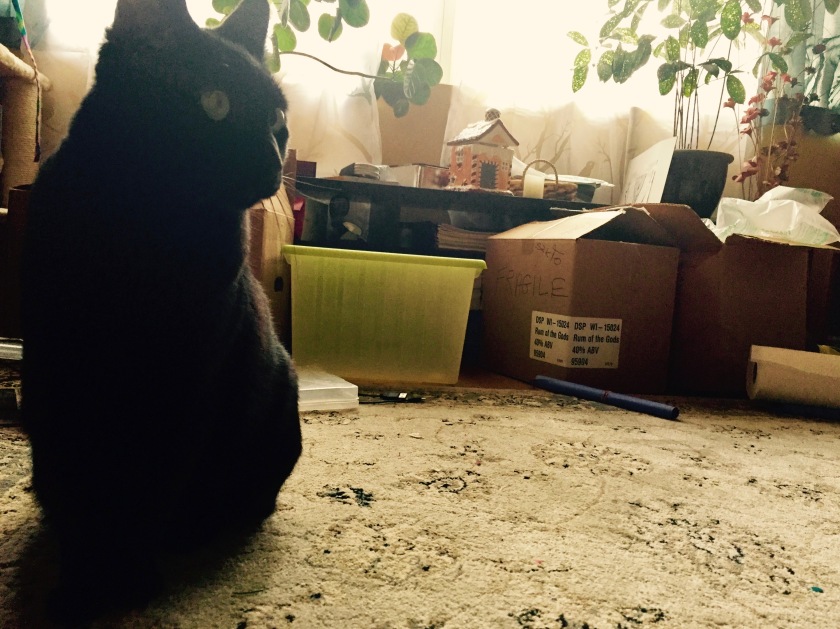 Both, my husband and I, are mostly excited about the move. He seems to be more excited than I am at times, because I often lose my shit. Like when I try to make an appointment for the biometrics in San Francisco and the online appointment system won’t let me, or when I discover another drawer full of random junk – like old tax-deductible receipts, kid art, grocery lists, Bed Bath and Beyond coupons and pictures from the pumpkin patch. (And here I thought I already packed all this!)

Our dogs and cat aren’t as excited. They’ve noticed the boxes. The cat decided to spray them liberally to let us know he’s not cool with all this change. The dogs eyed their Skykennel crates suspiciously, until they too peed on them and made them theirs. They now go there to rest as soon as I pull out another box.

Our kids are going through their usual mood swings. Mostly because they’re teenagers and all those hormones are wrecking havoc, but also because… we’re moving.

My son, who is 15 and at first thought it would be pretty cool to live in Europe, has now decided that we’re the worst parents ever. We (just me and my husband) are learning Danish on a couple of apps, but as soon as I start practicing how to say “You are drinking the duck’s water”, he proclaims that Danish “sounds retarded” and leaves the room.(Sorry about using that term in a derogatory way. Despite claims that the current generation is growing up very sensitive and fragile, they sure use a lot of foul language.)

He recently found himself a girlfriend, which is just bad timing. I don’t think that two and a half months before you’re set to leave the country is a good time to start any new project. This is not the time to start a new diet, a new exercise program, or find a new love. So I told him to stay in touch with her on Instagram or whatever the kids are using these days, invite her over to visit, and now go and make some progress on packing that room. And be sure to label everything clearly.

My daughter, who is 14, is taking this slightly better. It might be because in a couple of weeks I’m taking her with me to Copenhagen so that we can visit schools and find a place to live. We will be there for about a week and so I asked her what else she would like to see. She said: the mall. So I looked up malls in Copenhagen. Although she didn’t like the looks of Field’s (“This looks like an airport”), she warmed up to the pictures of Fisketorvet. I’m not sure that mall culture is quite the same in Denmark as it is in the U.S., though. I mean, this is just a hunch, but I believe there are other places for kids to hang out. So hopefully we’ll find some of those too.

Because like it or not, you kids are coming along.