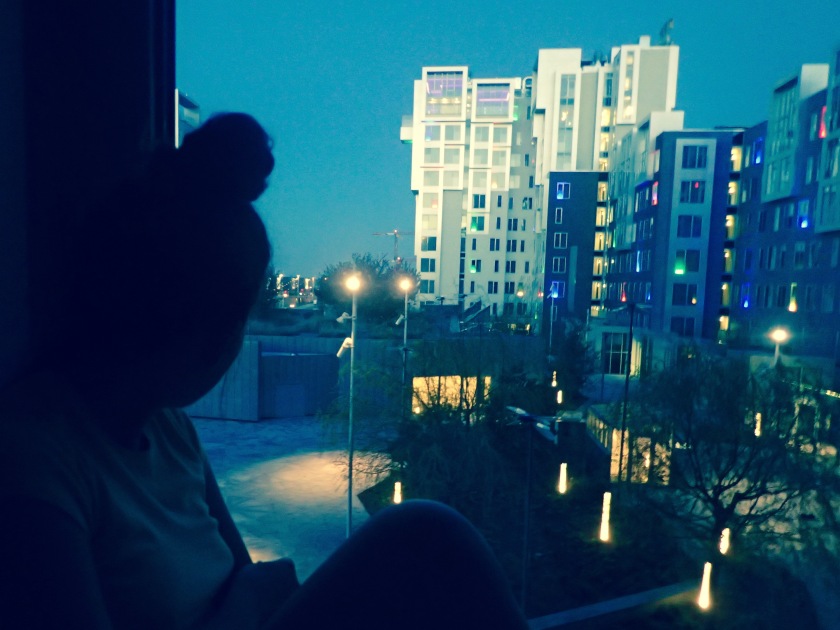 I am a long time hater of television. I stopped watching TV back in the 90’s, so don’t bother with any Seinfeld or Friends references. They’ll just go right over my head.

Of course, I consume television-like programming. That’s what Netflix, Amazon Prime, Hulu and HBO Go are for. But I told the kids that once we’re living in Denmark we’ll be watching TV. That’s because TV is one of the best ways to learn a new language.

So, once my daughter Nani (the nickname that her brother gave her when she was a baby) and I arrived at our hotel in Copenhagen (close to midnight) I told her we could watch some TV. Although we were both exhausted from the two day journey, neither one of us felt like going to bed right away.

We did a quick scroll through the channels. A couple of American movies (with Danish subtitles) that looked boring and a Nickelodeon channel in Danish that was on a loop telling us that it was too late for the kids to be watching television.

Eventually, we came across a Danish TV show. It was weird. I will blame its weirdness on the late hour. Here’s the synopsis:

All shots are filmed through surveillance cameras. We see an empty hallway with nothing there. Assuming it’s a horror film, Nani and I dig out some chips we purchased at one of the airports and settle down to watch.

Nothing scary happens. From the empty hallway, the cameras cut to a scene in a public bathroom. Two girls are chatting away in Danish and doing their makeup. I try to pick up a word, any word, but their speech is fast and seemingly unrehearsed. I’m starting to wonder if this is some sort of hidden camera reality TV show.

Cut to another public bathroom. This one has a guy in it. He’s shirtless and is about to wash his hands. As he turns on the faucet, instead of water green slime splashes out. Now we’re pretty much convinced this is a hidden camera type of show.

The green slime not only covers the shirtless guy, but also is all over the floor now. The guy starts slipping around on it and eventually falls down and hits his head on a pipe and gets knocked out. Now I’m no longer sure that this is reality TV.

Cut back to the two girls doing their makeup in the bathroom. They’re still chatting away. A light in the adjacent room starts to flicker and eventually dies down. Maybe this will be a horror film after all?

Cut back to the slime covered guy. He regains consciousness, gets up and struggles to get out of the bathroom. He finally makes his way over to a locker room, where he opens a locker and what should jump out but a bag filled with feathers! Now he’s covered in feathers. This actually might be a comedy.

Cut back to the girls. They’re finished with their makeup and are still ignoring the light that went out. They leave.

Cut back to various empty hallways in a creepy looking industrial building. Hoping for some horror we watch the cameras switch between many different hallways. Finally, the camera spots another guy walking down the hall. The camera person gets excited and zooms in on the guy.

This – fully clothed – guy enters yet another bathroom. He walks past the urinals, because apparently he needs to go No. 2. He opens a stall and curses. Apparently somebody didn’t flush. So he opens the second stall and goes in. Then you just hear sounds. Apparently he’s having gastrointestinal problems.

Back to the empty hallways. I’m still intrigued, but Nani decides this show is never going to be a horror film, so she switches the channel.

We land on a British reality TV show that is just as bad – or maybe even worse – as anything I’ve seen (by chance) in the United States. It has Danish subtitles that I try to follow.

The premise of the show is this: two people who know each other (but also secretly hate each other) go into a tattoo parlor. They choose tattoos for each other, but they need to be the kind of tattoos that the other person will be sure to detest. For example, one guy who’s a big football fan of some team gets the rival team’s logo tattooed on his chest. Another guy once cheated on his girlfriend, so now he has a huge back tattoo that says: “Once a cheater, always a cheater” in giant, Gothic letters.

While the tattoos are being done, the person who’s getting one can’t see what he or she is getting. Then the tattoo stays covered and they don’t see it until the big reveal in front of a full length mirror and some other mirrors strategically positioned all around, so that the tattooed schmucks can see themselves at every angle.

This is television at its worst. Let’s hope prime time is better, or I will reinstitute the television ban again!