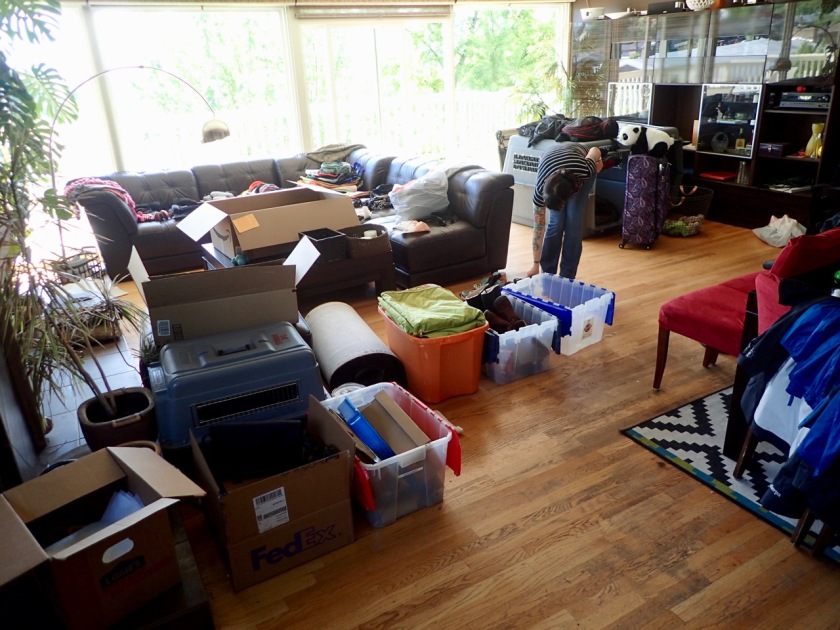 One of my many deadlines came up: finish sorting through the entire house.

It seems like something that could be accomplished in a leisurely month or two. At least that’s what I thought at first, until we were coming up on the deadline and I was still finding new boxes, forgotten stacks of mystery papers and film negatives. Every closet became a Tardis. Not much on the outside, but so much bigger on the inside!

At the very end it was a four-day marathon. Hours spent finishing what I somehow did not get to when I was hoping to get to it. My friend Lisa – who has an infinite supply of energy and is hosting our very stressed out family at her house now – was there to help. She organized things I dreaded to and was there for moral support. Without her I’d still be in that house.

And on the fourth day, after another couple of hours of last minute pick-ups, I decided to call it done. I decided to not scrub the downstairs shower or mop the laundry room. I took what I thought we should keep and called it good. One thing though: I left some clothes in the dryer.

The next day – the day when the estate sale organizers were showing up to sort through all the things we decided we did not want to take with us to Denmark – I went by the house around 7:45 am. The estate sale people were to be there at 8 am, but they showed up early and by the time I arrived the place was being re-organized.

I’m not sure I can describe the feeling of walking into that house with so many strangers digging through our – former – stuff. It was icky, it was wrong. I was asked what I was doing there, like I did not belong. There were tables being set up in my bedroom, where our bed used to be (we gave it away to friends before the estate sale people got to it) and a woman wearing a face mask was digging through my closet. Gross. Just gross.

I later told my older daughter, Ellena, that it felt like walking in on your ex and his current girlfriend. That feeling of showing up somewhere that used to be intimate and all your own, but you gave it up and now a stranger is in places that were once considered private.

I left the house vowing to not come back there ever again. I mean, I will go back to grab the rest of the laundry, but that’s it. I’m not painting the walls, I’m not working on the yard.

The house has moved on and I’m moving on too. It’s heartbreaking, but necessary.

I did go back a couple of days later to meet a contractor there. All our old stuff was pulled out of cabinets and closets and arranged on display. I was appalled by how much we’ve accumulated over the years! It’s disguasting. From now on, it’s the minimalist life for me.