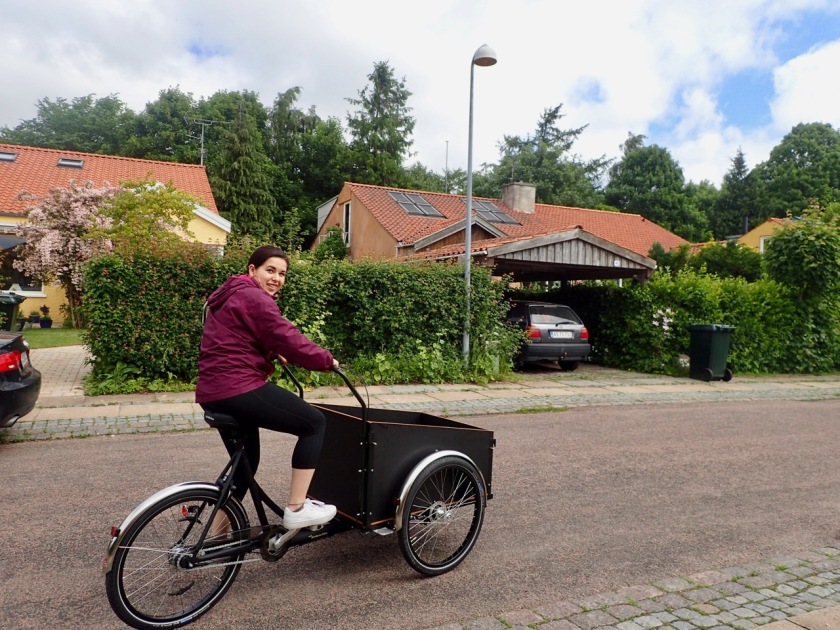 I’m in Denmark now and I’m not a fish, which means I need a bicycle.

On our first day here we met up with our relocation agent, Rikke. She’s the savior and the devil, all in one. I appreciate her immensely, but sometimes she assumes things of me that I am not capable of.

Such as: navigating the Christiania bike.

Rikke insisted that anyone who does not have a car, has one of these bikes. But it’s not even a bike. It’s trike, with a huge bin in the front. She said I’d be smart to get one right away. Actually, I don’t even think she said I “should” get one. She just took me to a bike shop and said: “yup. They have them in stock. Do you want a light that you need to recharge on your own or one that charges by itself and just stays there?”

Once I decided on the light, she said: “now go and pay.” (One thing that Danes have got going for them is that they most definitely do not beat around the bush.)

My bike wasn’t going to be ready until the afternoon, so I came to pick it up by myself. The plan was for me to bike back from the shop on my own. I mean, it’s basically a tricycle. I figured it would be easy.

I was so WRONG.

I can only compare steering this thing to being behind the wheel of a semi (after you’ve been driving a Mini Cooper) and trying to maneuver a Trader Joe’s parking lot on a Saturday.

My god, this isn’t a bicycle! It’s a bulldozer!

I took it out on the road and the bike lane, which looked so inviting and so generous before I took this thing and set it there. The bike lane seemed to shrink considerably. But I bravely got on and I pedaled and somehow I ended up in the middle of the intersection! That’s because this thing is impossible to steer! At least for me, when I’m trying it for the first time, on a busy city street.

Realizing I wouldn’t get very far without injuring myself or someone else, I took it back to the bike shop and demanded a refund.

The guy who sold me the bike wouldn’t hear of it.

“You’ll get used to it. You just need to practice.” And then he got on it and rode it around the store to prove his point.

So he did. He brough it to our house the next day and Nani got on. She was very excited!

Of course, she too almost hit a parked car at first. But soon learned to steer it around the corners. She rode this thing around and around our very quiet street.

On my to do list I put down: practice bike. It’s still there (I keep moving it to the bottom, because other things come up, such as: sweep the floors, pick up dog poop and pull out stinging nettles from the front of the house) and I still haven’t been on it since that horrible experience in front of the bike shop.

I hope Dave likes it.