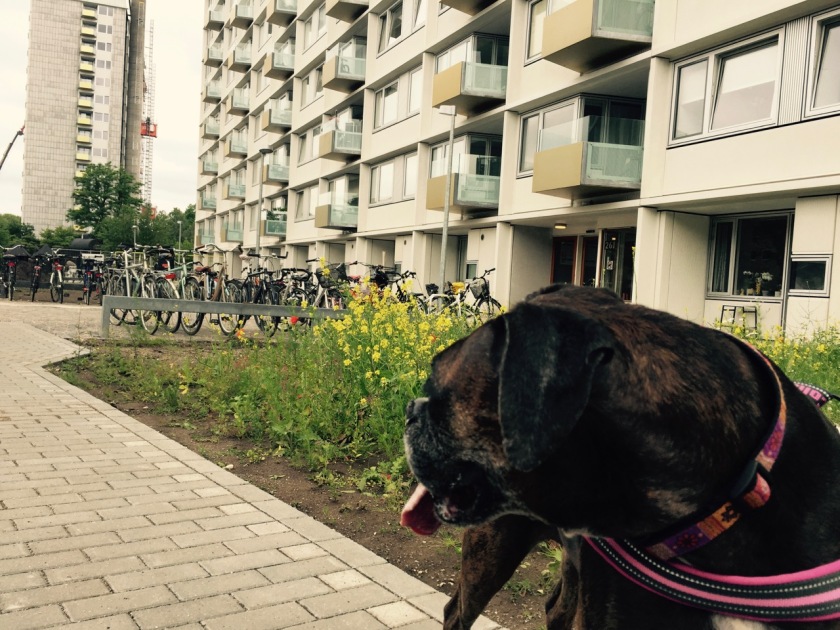 One by one I took my doggies to the vet.

The vet is located about a mile from our house and I didn’t know it then, but I know it now, you don’t even need to walk by the street to get there. There is a nice walking path behind these large apartment buildings, which we’ll be taking in the future (Cosmo doesn’t like walking by a main street).

The vet clinic is very pleasant. There are three doctors. Between 1 and 2 pm one is always there to answer the phone and you can call and ask questions for free. They also make house calls! Yes, if one of the dogs were too sick or injured to walk over to the vet, they will come to the house.

The place is very relaxed and casual. When I paid them a second visit they already acted like they’ve known me for years! I’m very pleased that I found them.

A few things are done differently here than back in the States. For example, in order to get an exam, the dogs had to get up on an examination table. Neither really wanted to, because they never had to do that before. When I mentioned that this was their first time to be mechanically elevated like that, the vet seemed very surprised.

“What do they do in the States?” she asked. “Examine them on the floor?”

Then, when it came time for the blood draw, they found the vein above Cosmo’s paw (in the United States the blood is taken from the neck). It seemed so strange, because the blood was flowing so fast! Some of it got on my shoe.

The blood test was to determine Cosmo’s phenobarbital levels. He’s been taking phenobarbital for about three years now for epilepsy. It’s just a part of his routine. He gets a morning and an evening dosage and he hasn’t had a seizure in a couple of years.

But to determine what his dosage should be, instead of just going off what he was being given before, they tested him. Well, the dosage remained about the same. I got a prescription and was told to go fill it at a pharmacy.

The pharmacy was very high-tech. The pharmacist in a white lab coat typed something into the computer and a robot got to work behind a glass wall. In no time at all the prescription popped out on the counter, from some sort of a shoot. I was impressed. (In the States they take your prescription, tell you to wait 20 minutes and then when you go to pick it up, they can’t find it).

But the pharmacist robot wasn’t the most impressive thing about this. I was most impressed when it came time to pay.

Trust me, I looked into other options, like Costco and online pharmacies. They all cost pretty much the same. When I asked why phenobarbital was so expensive, I was told that it’s because there is no generic version of the drug. So, there is no competition and the manufacturer can charge whatever they like.

Why, when we’re faced with something like insane prices, are we always told that the problem is “lack of competition”? That’s not the problem! Capitalism will not save you. They may keep telling you that it will (if only there was more competition…), but it won’t. It will kill you. And it would have killed my dog if we couldn’t fork over $135 every single month for three years.

I have no idea. I looked up phenobarbital. It’s not like it’s some obscure drug. It’s been on the market since 1912. Hitler used it to kill disabled children in Nazi Germany. Today it’s used to mainly treat epilepsy, but also many other health conditions. In people, as well as in animals.

The socialized healthcare does not extend to veterinary practices here in Denmark. I paid roughly the same for the vet visit here as I would’ve in Seattle. But the medicine that Cosmo will be taking every month will be at a fraction of the cost.