I’ve been wanting to go to Louisiana since we got here. It’s been recommended to us by just about everyone who’d been to Copenhagen, as one of the ‘must-see’ places. Although it’s not really in Copenhagen, but in a town of Humlebæk, north of the city.

Louisiana – the modern art museum – has a very curious name. Is it named after the US State or something more French? – I wondered. It turns out it’s neither. The name was given to the property by its first owner, Alexander Brun. Mr. Brun had a thing for women named Louise. All three of his wives were named Louise and so he named his home Louisiana. That’s even weirder than naming it after the state.

This museum is everything it’s hyped up to be. The art is spread out indoors and outdoors and there are many doors that you can wonder through, in and out, throughout your visit.

The weather did no cooperate during the day that Dave and I went there. It rained (poured! It felt very much like a Southern evening downpour in the other Louisiana), but the rain did give the outdoor sculptures a unique look we would’ve missed on a dry, sunny day.

The big show at Louisiana right now is Marina Abramović – The Cleaner. It’s a huge show. Don’t expect a single room devoted to her art. It’s the entire wing of the museum.

If you’re not familiar with Marina Abramović, brace yourself before going in. Even if you think you know what to expect, brace yourself. Leave the children at home. I mean, there were plenty of kids at this exhibit, but how many were scarred for life by it, is yet to be determined.

Don’t get me wrong. I think that she’s one of the most important contemporary artists on the planet. But it takes some strong nerves to get through this exhibit.

Take Rhythm 0. The 74 objects used in her performance from 1974 are on display on the table. It’s hard to stomach even looking at them, without looking at the photographs from the show. [In this piece, she placed 74 object on the table – things like a rose, honey, lipstick, cake, a bottle of oil, feather, string, knife, chains, a gun, and a single bullet].

The show lasted six hours. The instruction to the audience was that for the six hours they could do as they pleased with the artist, while she stood there, silent.

The show starts out pretty harmless. They pose her, draw things with shaving cream and tie strings to her. But then, after a while, things get abusive. They cut her clothes off, they stick thorns in her, they cut her. One person loads the gun and points it at her head.

Is that all it takes for humans to descend from civility to sadistic cruelty? Less than six hours? After six hours (the gun wasn’t fired, but you can see in the photographs how much she bled from her cuts), she started to walk around and everyone ran away.

Rhythm 0 is just the one that most resonated with me. But there is plenty more. More pain, more pushing of the limits. I didn’t take any pictures at the Abramović exhibit. I forgot. I may take some when I go back next month (the show runs through the beginning of October), because I didn’t even get to see the entire Abramović show. At some point Dave was getting light headed and needed food, while my stomach was sinking and I was feeling sick.

Luckily, in the middle of the exhibit, there is a little hiding room, with a long line of people waiting to enter. This is the Yayoi Kusama infinity room. It was a much needed escape from Marina Abramović’s exhibit. 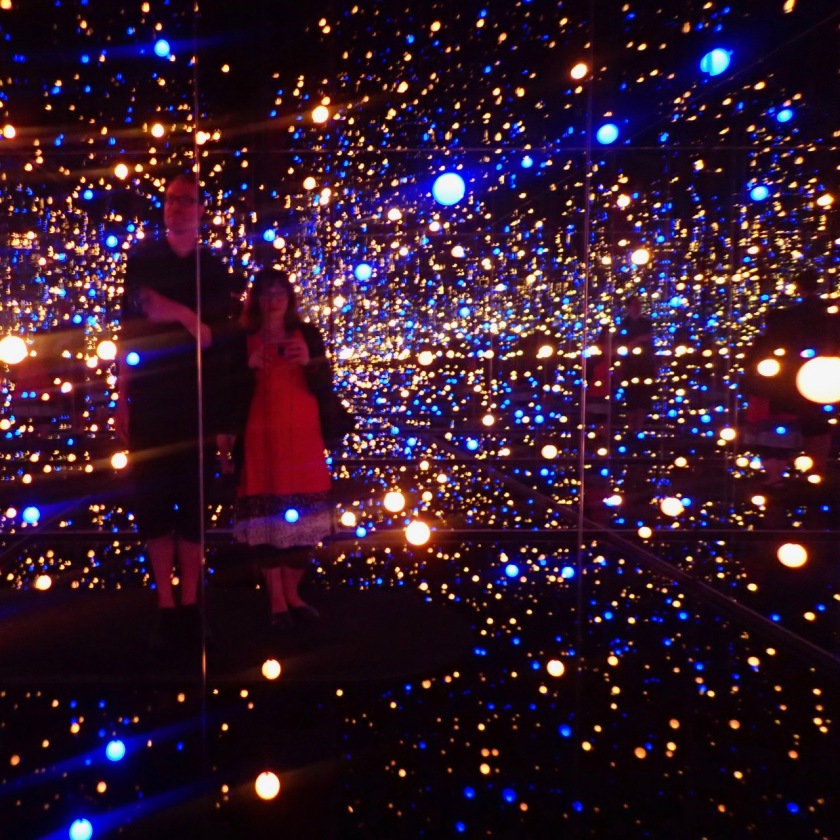 We then got lunch at the cafeteria. Normally, I wouldn’t post pictures of my lunch, but check out the amount of fish eggs in that dish! It was so good, we went back for seconds!

After lunch we wondered around outside for a bit. This was before the downpour. 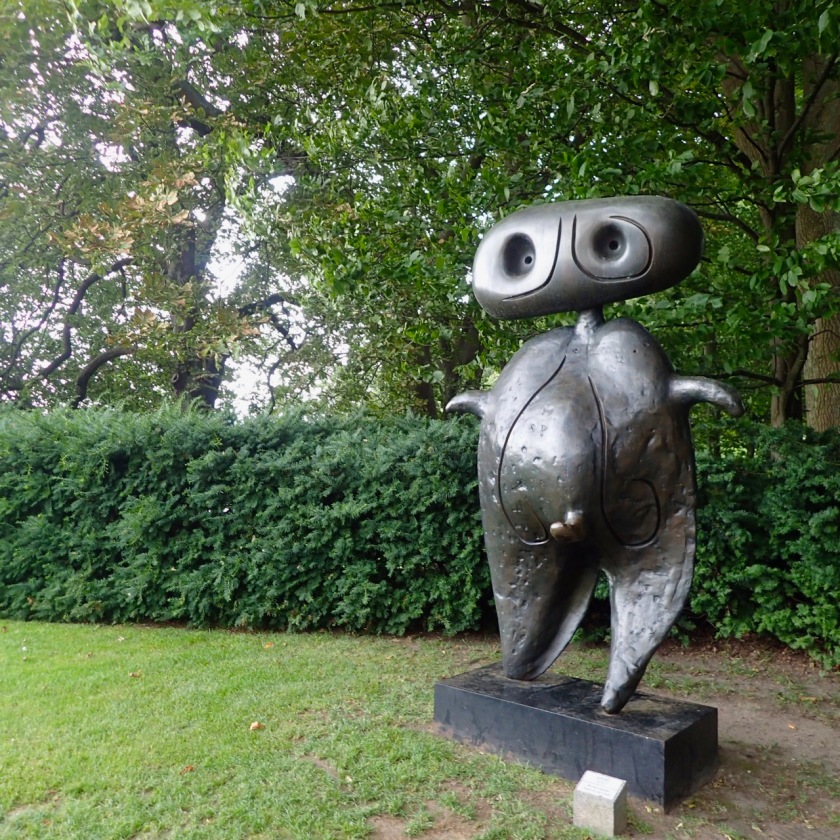 I’m a big fan of Mirò. Especially his sculptures! 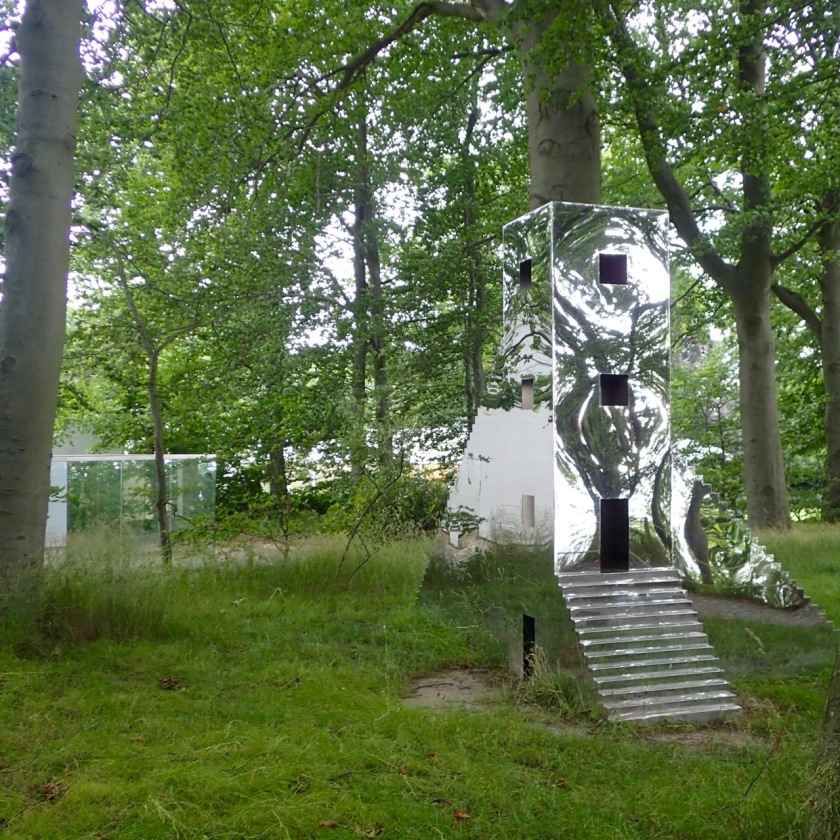 The gardens at Louisiana are extensive and there are so many surpises throughout!

These sculptures – so reminiscent of Pokemon – may have you think that this would be a good place for children. Well, there is a daycare, where you can leave your children while you view the museum, so I’d advise anyone with kids to do that. The grounds, with so much art in the park, may seem like a great place for a child to explore, but beware.

There is a deck, overlooking the sea, with no railings and a big gap in the boards. Big enough for a kid to fall through. 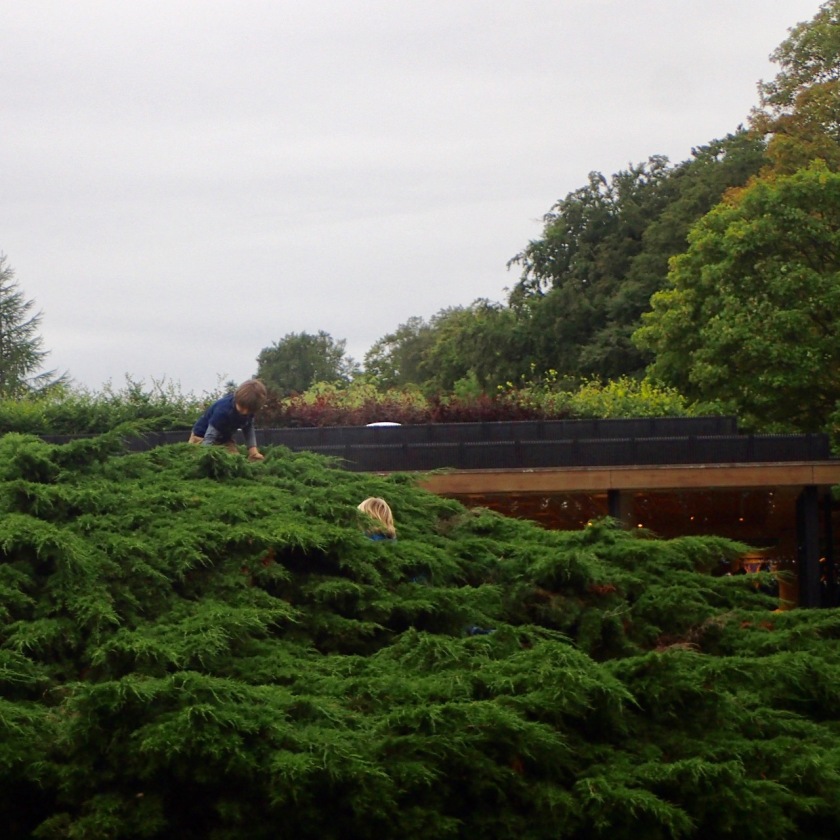 But people bring their kids and let them climb trees.

And roll down the hills.

After it started to rain, we moved back indoors and saw more of the exhibits there, but not all of them. The Giacometti is on a permanent display and it’s very cool.

Lots of Denmark’s own Asger Jorn, which I really did not like. The colors were awful. In some art circles this might be called “clown vomit.”

There’s a huge David Hockney on display as well and I struggled to like it. I decided I’m not into Hockney either.

Lots of Andy Warhols though, to cleanse the pallete.

I am ready to go back now!