I’ve been picking up some Danish lately (or rather – cramming it in as much as my brain will allow) and now I know that Dyrehaven does not mean “deer haven”. But if it did, it would be fitting! (Dyr means ‘animal’ and haven means ‘the garden’ or, as in this case, ‘the park.’)

The Jægersborg Dyrehave (or Dyrehaven) is located just north of Copenhagen proper. This vast green space once belonged to the king of Denmark, who built himself a lodge (Ermitage) and used the grounds to hunt deer. But that was in the olden days. Today the lodge still stands (I’ve only seen it from far away) and the park is a UNESCO World Heritage site. 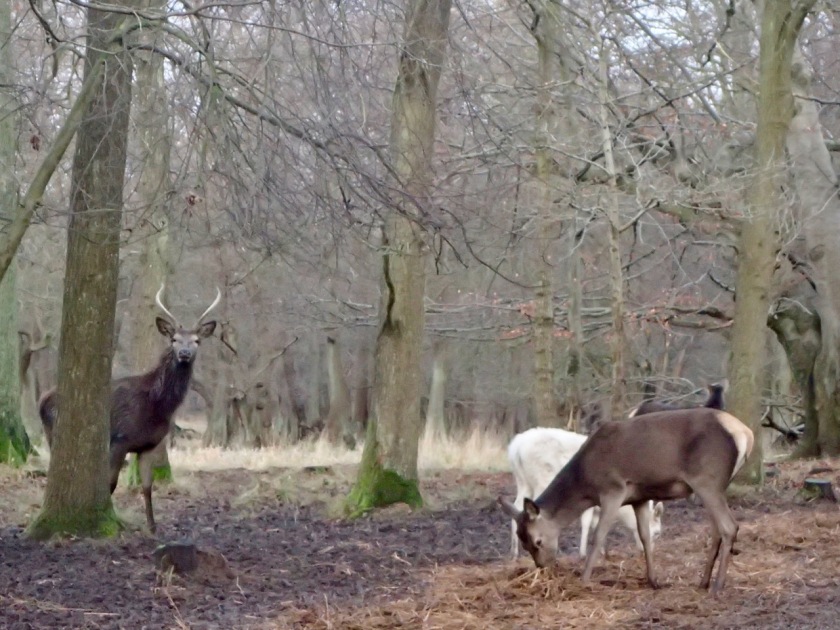 This place is beautiful and vast, with lots of old trees and huge stretches of green meadows. Here you will also find world’s oldest amusement park (Bakken), a few fantastic restaurants, and of course, deer. The deer are not hunted, but their numbers somehow mysteriously hover around 2000. 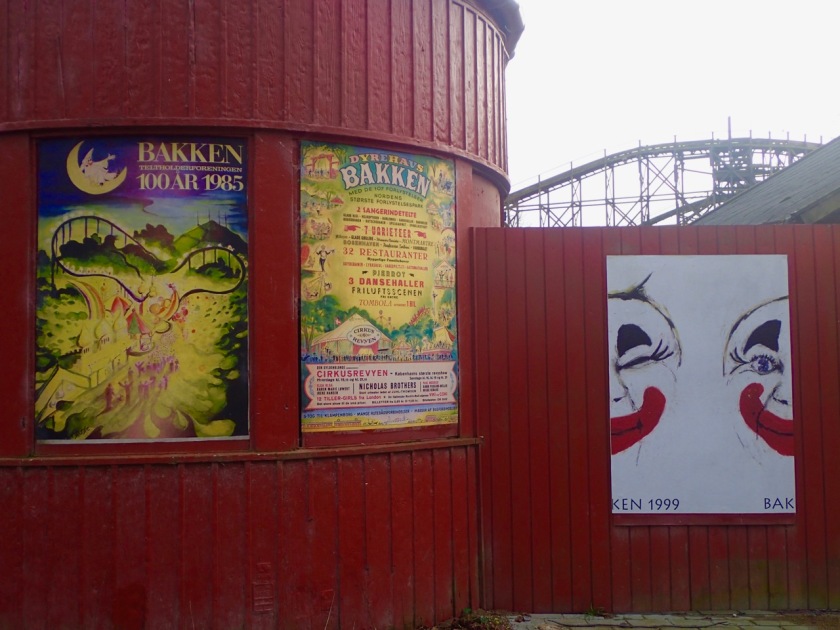 I’ve made it to Bakken last summer but didn’t venture into the park much. Now I’m wondering what took me so long.

Bakken is currently closed. It closed at the end of September and it won’t reopen until the last week in March, but just because the rides aren’t operating, it doesn’t mean that you can’t walk around it.

When it’s closed, this place is very eerie.

Despite this being an amusement park, just sitting there, unsupervised, most amazingly, it’s not at all vandalized. No homeless people sleeping anywhere, no hyperdynamic needles thrown about, no graffiti, no human feces. Denmark still manages to surprise me.

My daughter, Ellena, and I walked around the amusement park for a while and when we got hungry we found a restaurant in the woods. Located in Peter Liep’s house (he was a sharpshooter and apparently really good at killing things), this restaurant turned out to be quite a pleasant surprise! If you’re visiting Denmark and looking to try authentic Danish food, I would strongly recommend making the treck into these woods. The meal we had here was fantastic. 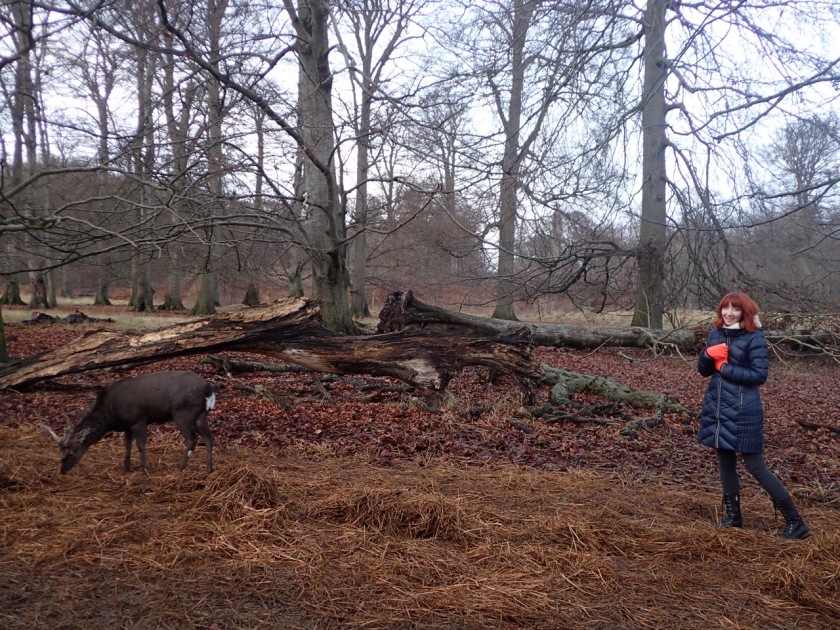 After we ate, we set off in search of the famed deer. Neither one of us was especially hopeful (since this took place between Christmas and New Years, the park was full of visitors; sure to scare off wildlife) until we came across this little guy having a meal of his (or her?) own.

Not much bigger than one of my dogs (both stayed at home), this deer was too busy eating to care about us.

We were about ready to call it good and head home when off in the distance I saw something moving and decided we needed to investigate. 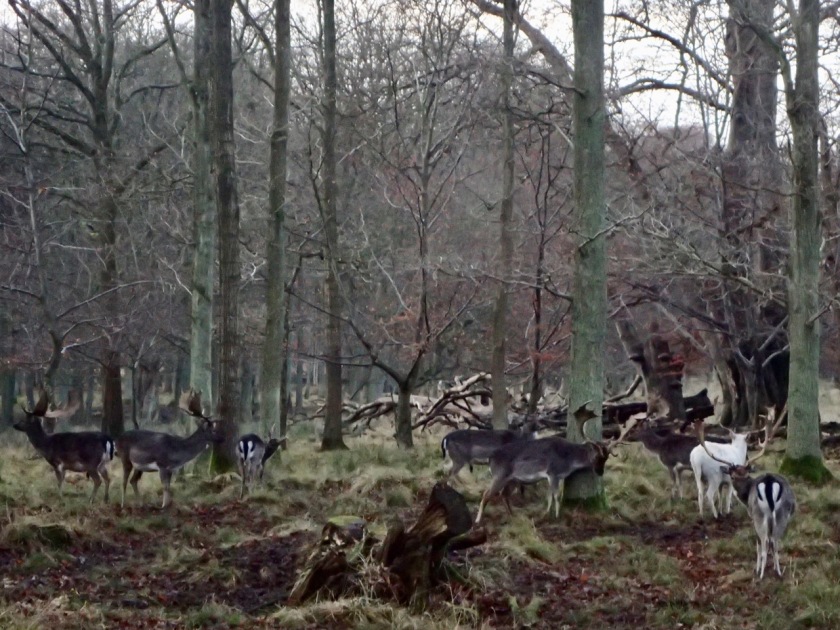 Here we came upon an entire large herd of all kinds of deer! There were easily 30 or 40 deer here, grazing together. When we got closer, they moved away a bit, but never took off running.

I am no deer expert, but from what I’ve read there are about 2000 deer in the park. About 80 percent are Fallow Deer, 15 percent are Red Deer and 5 percent are Sika Deer. I’ve looked them up and Fallow Deer apparently are the ones with the elaborate thick antlers. 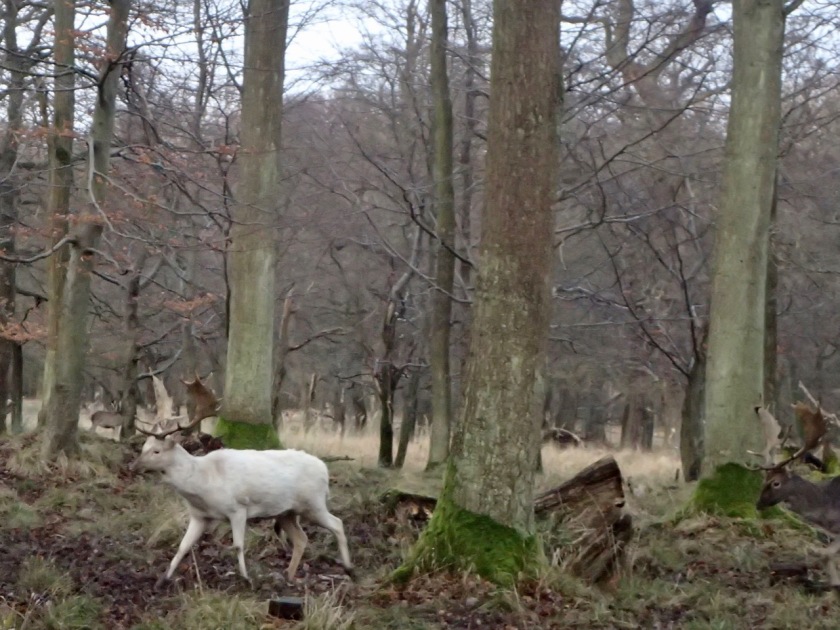 Some Fallow Deer are white, which makes them easy to spot. This guy wouldn’t last long in North America. Unless they change color only for the winter… There’s so much about deer that I don’t know.

Some of these were a lot bigger too, closer to a size of a horse than a dog!

Being around these animals made me so happy! I think I need to make a trip to Dyrehaven a regular thing.